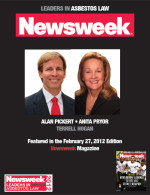 Since 1984, Terrell Hogan has represented more than 6,000 asbestos and personal injury victims and their families who have suffered from mesothelioma, lung cancer, and asbestosis. Our Law Firm was the first Florida Firm to get an asbestos verdict for an injured asbestos victim. Alan Pickert specializes in bringing financial relief to families affected by Asbestos exposure.

If you, a loved one, or a family member were exposed to Asbestos and have been diagnosed with Mesothelioma or Lung Cancer we are so sorry for this terrible, avoidable tragedy. For over 26 years Alan Pickert has been representing innocent victims and their families confronting this disease. We have successfully represented over 4000 asbestos victims, recovering over $135 million dollars in verdicts and settlements. Hardworking men and women believed their occupations and working environments were safe. In most cases, they worked for manufacturers and companies that knew of the hazards of asbestos exposure but put profits ahead of safety.

Since the early 1930’s, asbestos manufacturers have known about the health risks associated with their products and concealed it from the general public. Even the US government waited until the 1970’s to take action and it was not until 1989 that the Environmental Protection Agency (EPA) banned all new uses of asbestos.

Alan Pickert is dedicated to every client.  We believe each client is special and should be treated with respect.

We are very proud of the unsolicited comments our clients have made about us and our staff. Here is a sampling of what they had to say.

Since 1984, Terrell Hogan has been handling asbestos law suits on behalf of victims of asbestos exposure and has extensive experience in recoveries made from the Bankruptcy Trust Funds.

It is very important if you become a caregiver or join the support of others providing care for a mesothelioma patient, that you understand your role and exercise your support without sacrificing yourself.

What You Need To Know